Very warm welcome to our website, and thank you for this opportunity to share with you few highlights of our company’s journey. It all started in 1972 with one taxi and 2 people. From that point with hope, determination, and hard work that start up has developed to the Coach Charter Germany today serving tens of thousands of passengers regularly.

The company now has more than 100 multi-lingual employees, a fleet of more than 65 Long Distance Coaches of various sizes that provide all the comfort, safety, and conveniences that passengers require to complete a wonderful voyage.

This family run company now has bus depots all around Germany that cover most of Europe thanks to Germany’ strategic central location and German reliability.

Over the years, we had the privilege to become a member of Germany's largest Coach Tour Organization (RDA),joined the American Society of Travel Agents, also became part of the Federal Association of German Incoming Companies & DMCs, and listed as a member in the new issue of "Booking Germany" the official magazine from GNTO (German National Tourist Office). All these recognitions offer you reassurance for the professional service you will have through your journey with coach charter Germany.

We have a Tourism professional dedicated for the Leisure packaged tours, roundtrip package tours, or river cruise tours. Jessica will help you plan, book, and organize the complete package for your group’s best interests and enjoyment.

All you need to benefit from this wealth of expertise is to send us an itinerary or a basic plan for your wishes and we can work together to organize your coach service, or your complete package by Jessica for that dream vacation you really deserve.

Why you should go with us?

The Story of Coach Charter Germany


It all began with Heinz & Brigitte Irro and 1 taxi back in September 1972. After working for Volkswagen’s Factory in Wolfsburg, Heinz returned to his home town Lüchow. Lüchow is a lovely town with many half-timbered houses in the center. It is located very centrally in North Germany with 1.5 hours to Hamburg and around 2 hours to go to Berlin, Wolfsburg, Braunschweig, Hannover and Bremen.
Heinz and Brigitte started their taxi business Taxi Irro by not only doing usual transfers but also patient & hospital transports and dialysis rides. Heinz was driving the taxi and Brigitte was managing the bookings by phone. There have been 5 competitors in town at that time, so it was hard work to grow the business.
After few years one taxi was not enough to fulfil the rising demand, so first employees were hired and more cars were taken on board.
In the early 80s a new business field was opened by Heinz when he was buying his first bus in 1982, a Mercedes Benz O 309. Later, in 1988 Irro Reisen was born. The family business was offering multi-day package tours as well as one-day journeys to places like the Baltic Sea Coast, Hamburg, Berlin and Central Germany. Their guests mainly came from Lüchow and the surrounding area.
By creating more and more tours Irro Reisen changed into a 100% travel agency. With the fall of the Berlin Wall and the reunification of Germany – new demand came from the former GDR. They intensively wanted to travel and thanks to its strategic location Irro Reisen was able to satisfy this new demand. Holiday destinations have also expanded to Italy, France and the Netherlands.
The growing business required more and more space for vehicles, garages and administration. In 1991 was the groundbreaking of the new Irro Reise Headquarters in Lüchow with a new founded business complex. The new administrational building was surrounded by parking spaces for busses, taxis as well as a modern Mechanics garage with a carwash hall.
It was not only Heinz and Brigitte who let this family business turn into a success story over the years. Their two children Stefan and Jessica were involved from the early days too. The family house was equipped with radio systems to hold contact to drivers. When the telephone rang and someone called for a taxi ride all the family members picked up the phone. Later, Jessica did an apprenticeship as tourism professional and led the travel agency Irro Reisen. Stefan left home for military service and university studying economics and business administration to return once finished to the business.
In 2002, with the start of the new century and 30 years of business experience the company of Heinz and Brigitte has grown up to be one of the most popular employers in the region. They expanded the business and added public transport lines to their offers. Together with the local public transport service Irro Verkehrsservice GmbH has taken care of more than 2.000 pupils on their way to school every morning. Moreover, busses from Irro Reisen can be seen as regular public transport services from Lüchow to Lüneburg.
When the oldest son Stefan re-joined the company, it was after he gained more industry experiences abroad and finished a degree course in Economics. The family again started organizing this rising business as a whole team together.
In 2009 Stefan created another business field by offering chartered bus services in Germany and all over Europe. A new team of international and multi-lingual associates developed the segment known today as Coach Charter Germany, building up bus depots all over Europe and Germany and developing partnerships with other bus companies in different European countries.
2019 saw another milestone in the history of company when Stefan succeeded his father Heinz as the new CEO. The company is still fully in the hands of its founder’s family and is looking to a growing and prospering future for many more years to come. The family acknowledges that one of the biggest challenges for this decade will be the development of electric busses and alternative driving options. We are looking forward to the 50th anniversary of the company in 2022.
Today Irro Verkehrsservice GmbH has more than 160 employees and 120 vehicles.
Our business fields are:

We have our own fleet of modern coaches.

Our coach hiring and group department offers indiviual service and assistance when planing your tours and events.

Our coaches are at your disposal - punctual and reliable to guarantee the best service for you and your valuable travellers. 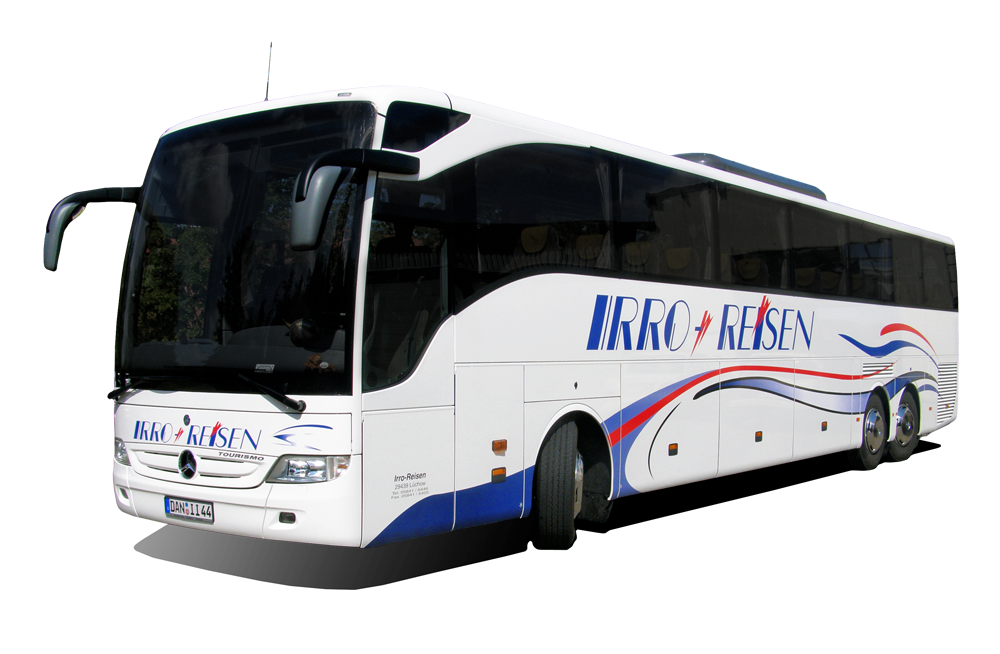 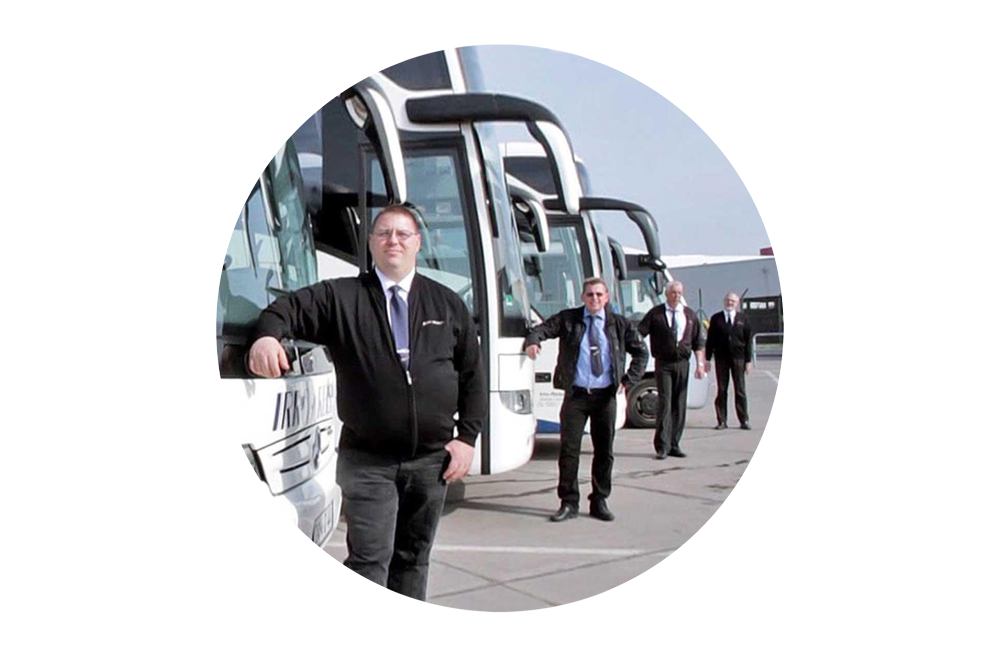 Our coach drivers have several years of experience on European roads and security training maintains their quality of driving.